Yesterday I was a guest of Boeing Commercial Airplanes on a preview tour of the brand new Boeing 787 Dreamliner.

The 787 test aircraft was at Boston's Logan Airport because it is scheduled to be the first US airport with regular 787 commercial service with a nonstop Japan Airlines flight to Tokyo.

In this short video, I speak with Capt. Randy Neville, chief pilot, 787 program, Boeing Commercial Airplanes and Diana Klug, Director of Marketing for Boeing Commercial Airplanes. We tour the new Boeing 787 Dreamliner cockpit and cabin and I focus on passenger comfort including the large windows and customizable LED passenger compartment lighting.

This airplane is terrific. The passenger compartment is higher than other passenger planes and that gives it a less claustrophobic feel. The large windows with a dimming feature (see the video) means that there is no longer "up or down only" like with normal shades and there is no need for sunglasses if you want to look for icebergs on the return day flight from Europe in the winter sitting on the right side of the plane. 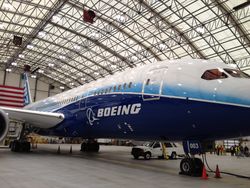 It's exciting that my home airport will now have nonstop service from Boston to Tokyo on Japan Airlines. I’ve had a primary US residence in Massachusetts for more than 20 years and for 7 of those years I lived in Tokyo. The hassles of switching planes vs. a 14-hour nonstop are enormous.

Boeing actually worked with a psychologist and a cultural anthropologist and conducted many interviews with frequent flyers to design the plane the 787 Dreamliner from the passenger perspective, thinking that people will book travel based on the plane.

That's exactly what I do (and what other frequent travelers do too). When you're in the air as often as I am comfort is the most important thing -- more important than price, special deals, and other things. 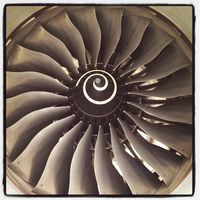 Fun aside. When I was taking a photo of the 787 Rolls-Royce engine turbine that I posted to Instagram, the Boston Globe was photographing me in an image that was published here.

PR thought: What better PR asset than a beautiful airplane with articulate pilots and marketing staff to explain it. Great job @Boeing and @BoeingAirplanes.

What would you do?

So what would you do? Given a choice between variables like price, schedule, an airline that you have a frequent flyer account with, and number of stops, what are the most important factors for you? Would you choose to fly the 787 Dreamliner for the experience?

Note: I filmed the 787 video myself with my iPhone 4S and edited it in iMovie.