This morning, the @foxnewspolitics Twitter feed was hacked and populated with tweets reporting the death of President Obama. A group called Scriptkiddies claimed responsibility.

As I am writing this about 3 hours after the messages were posted, the offending tweets were still live. Assuming they will be taken down soon, I took a few screen shots. (Click to enlarge) 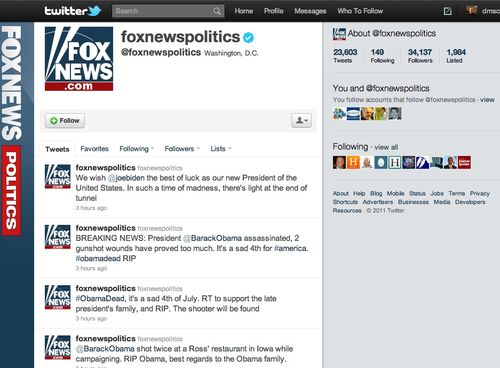 Here are a few things I take away from this.

Don't retweet something unless you are sure.

Had you seen the fake tweets from Fox News in your stream, you should have taken a moment to look at Google News or some other place to see if any other news sources are reporting the news. Confirmation is essential. In this example, hundreds of people retweeted the misinformation. 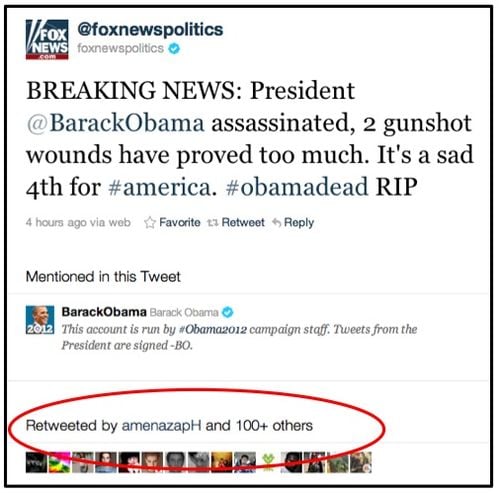 Have a plan in place in case your organization is hacked.

The compromised Twitter ID is still showing the offending tweets hours after the incident. My guess is that the Twitter ID was changed by the hackers, so Fox News may be having trouble getting into the Twitter ID. That's understandable.

There should be a notice on the Fox News Politics site that explains what happened. As of this writing there is no such notice. A search of the site brings up nothing.

At the very least, the main Fox News twitter feed should have a notice about the hack. But the last tweet from @foxnews was 8 hours ago as I write this. It's sort of embarrassing that a real-time news organization has gone so long without seemingly noticing what's going down.

If you're in a real-time business (and aren't we all?) your site and Twitter feed are not comfortable Monday to Friday, 9:00 am to 5:00 pm toys. They are instant communications tools.

A crisis happens when you are least prepared

Remember, when a real-time crisis happens to your organization, it is likely to be on a holiday, or a weekend, or at night, or when the boss is away.

In this case, since this happened early in the morning USA eastern time on the 4th of July long weekend, it was all of the above.

Who has the keys to the site?

If this were to happen at your organization and you were the first to see it, could you get an update to your site at 5:00 am on a holiday?

Do you know how to get an update your company's Twitter feed in a real-time situation?