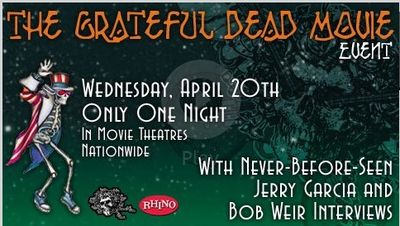 The original Grateful Dead Movie will be shown tonight -- one night only -- in hundreds of theaters around the USA.

It is an opportunity for members of the vast Grateful Dead tribe to come together from coast to coast to celebrate the band and to have an opportunity to see the film that Jerry Garcia obsessed over creating for many years on the big screen.

I wonder. What are you doing to bring your Tribe together now and then? Do you even have a tribe? Can you create one?

Originally recorded at San Francisco's Winterland Arena in 1974, The Grateful Dead Movie is a combination of cinematic rockumentary and concert film.

Rhino - the Grateful Dead's record label, operator of the band's Dead.net site, and licensor has but the one-night-only movie event together with Fathom Events. 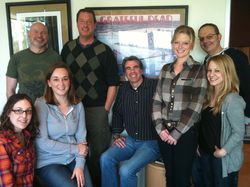 Late last month I had an opportunity to spend a few hours with the Grateful Dead team at Rhino's offices in Burbank, CA. I can tell you that Mark Pinkus and the rest of the people who work on the Dead's business are constantly thinking about the Grateful Dead tribe. Every decision is viewed from the lens of what the tribe will think.

What about your tribe?

PS: Why choose today, 4/20 to show the film? Well, you either know or you don’t. Google it. Flashbacks possible.

How Hagerty Insurance Builds Fandom: Focusing on People, Not Products