In the 1990s and early 2000s when I was VP marketing at several technology companies, I relied on research supplied by industry analyst firms including Gartner, Outsell, and Forrester. We paid a lot of money for the research, usually in the form of a subscription allowing access to certain reports.

So what's going on over at Altimeter Group?

This firm doesn't charge for research like other analyst firms. They publish at no-cost using Open Research, giving away valuable information to build a fan base and impact the market.

This is exactly what the Grateful Dead did. 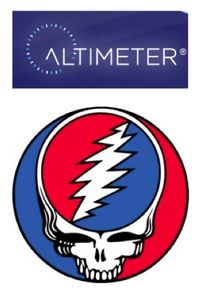 Rather than focus on record albums as a primary revenue source (with touring to support album sales), the Grateful Dead created a business model focused on touring. And to drive more people to shows, the Dead allowed fans to tape concerts, exposing the music to millions.

As Brian Halligan and I wrote in our book Marketing Lessons from the Grateful Dead entirely new opportunities emerge for those, like Altimeter Group and the Grateful Dead, willing to challenge established business models.

At SXSW, I connected with Jeremiah Owyang, Industry Analyst and Partner at Altimeter Group to discuss this business model.

“We're doing Open Research,” Jeremiah told me. “This means we conduct independent research (no one is paying for it but us, which I assure you, has some significant costs) and then are publishing it under creative commons for anyone to use and remix for non-commercial reasons with attribution.”

Here’s an example report The Two Career Paths of the Corporate Social Strategist. Be Proactive or Become ‘Social Media Help Desk.’ I note that at the time of this post, there are nearly 1,000 tweets of the report, nearly 300 Facebook shares and more than 25 comments. The same report, posted on Slideshare, has over 48,000 views.

Building a fan base

Jeremiah says this is very different than other traditional analyst models, those who charge subscription rates. “We get wider influence as the market adopts our thought leadership,” he says. “And our competitors cannot copy this, as it would disrupt their relationships with paying customers.”

“Business is booming for advisory services!” Jeremiah says with a sly grin over drinks in Austin.

Just like the Grateful Dead was able to sell millions of concert tickets on the back of their business model disruption, Altimeter Group is achieving success with theirs.