This month marks the 35th anniversary of The Doobie Brothers' platinum album Takin' It To the Streets. The songs from this album seemed to be always on the radio when I was in High School.

Bands that have been around for decades sometimes struggle to maintain their existing fans and grow new ones. So I was interested to see how that the Doobie Brothers took a page from fellow San Francisco band The Grateful Dead’s marketing playbook when they launched their new album World Gone Crazy. 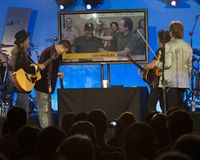 The Doobie Brothers wanted to launch using social media and teamed up with Cisco to hold a free concert broadcast via Cisco TelePresence and USTREAM, performed at Cisco HQ in San Jose.

Partners AT&T provided the business exchange network communication that delivered the show live to a dozen cities and Marriott made available public suites where people can rent the technology by the hour.

During the TelePresence session, there was time available for people to ask band members questions.

Around that time, I was San Francisco for a keynote and had a chance to talk to Xander Uyleman to find out how Cisco pulled the gig off. (Yes, my interview was filmed for real with this stunning backdrop – this is not faked!)

This interview is delivered using technology from VisibleGains.

Xander told me that teaming up with the Doobie Brothers not only helped the band reach 20,000 people with the free streaming show but also drove visibility for Cisco, AT&T and Marriott.

The band also used this occasion to drive fans to the Doobie Brothers Facebook page. From an initial fan base of just 1,000 people, they moved to 50,000 around the time of the launch and 100,000 fans now, a few months later. Upon release, the album debuted at #39 on the Billboard charts no doubt helped by this interesting launch.

Check out the San Francisco area NBC affiliate's report on the show.

Disclosures: I have done consulting work with Cisco and I am on the board of advisors of VisibleGains.