You're on the road, perhaps at a coffee emporium, and you want to find a free WiFi network. Hey, we’ve all done it...

You look at the network names and there's the usual assortment: People who default to use a WiFi name like 'linksys,' some who use their family name 'Jones_Network,' some random nonsense like 'FJ8673UHNN4,' and the credit-card-required paid networks like 'Boingo_Hotspot.'

But then you see a network called 'Hipster Doofus.' Ha ha ha ha! What fun! Someone has a sense of humor!

Imagine how many people are seeing that network name. If it's in a crowded city, it could be thousands a day.

How about using the 32-character SSID space to broadcast a marketing message?

Here are some ideas. (If you have some fun ideas, please comment).
An auto dealer: Free_test_drives
A pub: Try_Joes_Martini
A bookstore: Stop_hacking_and_read_a_book

The idea of wifi names as a marketing tool came to me courtesy of Alexandra Janelli.

In 2009, Alexandra was at a bar on the Lower East Side of Manhattan when she noticed the network her iPhone brought up was 'Alcoholics Shut In' and that prompted the creation a blog-turned-website WTFwifi.com to chronicle interesting WiFi names.

"Wireless router names are breaking through the walls of homes carrying with them virtual messages, airwave graffiti, or warnings only to be decrypted by our smart phones and computers," Alexandra says. "They are monocles into the cryptic world around us."

During Alexandra's Warwalking, she learned that people use their WiFi names to send messages.

"In many cases the messages relate to staying off their connections," she says. "However, you do get the users who will send very direct messages such as 'Fat Man on the 7th Floor is a Douche' or 'We Won Too' which plays off of another WiFi networks name 'We Won', or even 'Hipster Doofus' and 'Son of Hipster Doofus'. While this is not a conventional form of social media its certainly an easily changeable medium where people are becoming more and more aware of its uses."

Got any fun WiFi names near you? Why not share by commenting here.

Anyone out there using a WiFi name as a marketing tool? I'd love to hear about it. I'd like to add some good examples in a future book. 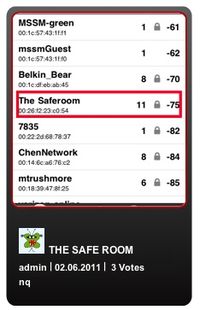