Transforming your business and yourself in 2011

With the New Year comes an opportunity to transform your business. This is especially true if you run a small business or are a sole proprietor.

You don't have to accept the label others have put on you. You don't have to limit your company by a label like "B2B" or "auto industry." Forget terms like lawyer, consultant, writer, singer, graphic designer.

What interests you? What do you love to do? Why not make that part of your work too!

Maybe you can generate a new revenue source. Maybe you can spruce up your personal brand. Certainly you can have more fun!

I've morphed many times. I worked on a bond trading desk. I acted in Japanese television commercials. I was Asia Marketing Director for Knight-Ridder, at the time one of the largest newspaper companies in the world. I was a VP marketing at several technology companies. I was a marketing consultant. Now I write books and am a marketing speaker and run full-day seminars on marketing.

Cliff Pollan transformed a company that used to offer a video channel by creating a new company name and a new business focus. Now VisibleGains provides marketers an easy way to create engaging and interactive video as a lead generation tool.

Grant Griffiths is a former Kansas lawyer. His blog was so instrumental in driving business his way that he now focuses on helping people Blog for Profit and become Home Office Warriors.

One of my favorite examples of transformation is country music artist Billy Dean. With twelve albums and eleven top 10 Billboard country chart singles over his eighteen-year career, Billy is a star.

Billy has transformed himself many times.

He started Billy Dean Writers Block Professional Songwriting Collaborative where, along with other award winning songwriters, he will critique songs and share inside tips on how to write a hit.

His Song Sessions is an interactive workshop designed to transform a staff of any size into a creative and powerful songwriting team. The goal of the Song Session is to capture what the company does and why it exists in a song.

I had an opportunity to meet Billy backstage at a Boston area concert in late December. He was touring with Kenny Rogers and my friend John DiPietro introduced us. (John is also a man who has transformed many times. For example, here is his Motorhome blog.)

I spoke with Billy about Agritainment, a way for family farmers to find new revenue as tourist attractions. 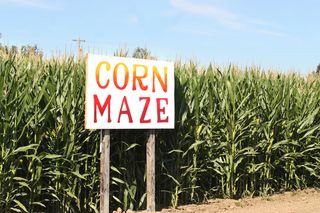 With the New Year comes opportunity for you. How can you get out of your rut and create something new and interesting?