The Goth in development writes in the first person singular

When I get pushback from Corporate Communications teams about employees on blogs, forums, and social networks, it’s usually because the professional communicators are scared silly about hundreds or thousands of people in a company "speaking on behalf of the company." 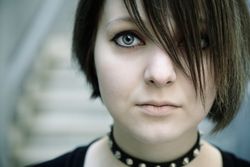 The PR team imagines the Goth who works in software development who has 5,000 Twitter followers delivering "messages" on behalf of the company. Yikes!

The wrong answer is to simply say "no" to allowing employees to communicate on social networks. Sadly too many companies do just that.

There is an amazingly simple and effective way to deal with this corporate concern.

Create a policy that requires people to write in the first-person singular on social networks. That's what IBM has done with its IBM Social Computing Guidelines.

In fact, I think that speaking in the first-person singular is essential to social media when used at work.

When somebody from your company says something in a social network using "we" -- as in "We're going to create a new product and release it in December!" -- readers might think that this is some sort of formal corporate announcement, even if the person is not authorized to talk about product launches. That's the part that frightens corporate communications people.

However, when the same employee uses the first-person singular -- "I'm working on a new product targeted for December release!" -- it becomes a personal statement or a personal opinion.