As I write this blog post it is 15 hours since Spain won the FIFA World Cup.

As I write this, the story has been tweeted more than 1,400 times since posted.

That the story, which is in draft mode, was sent in error is not all that unusual. These things happen. I recall about ten years ago the horror of accidentally sending a draft press release to the wires. Ugh. But they are usually spotted immediately and deleted.

In this case it has not been noticed by anyone at CBS News for ages – 15 hours on the real-time Web is an eternity in dog years.

My guess is that nobody at CBS News is monitoring Twitter in real-time or they would have seen all the tweets.

Thanks to my friend Remco Janssen, who lives in Amsterdam, for alerting us to this. He says it's fast becoming a trending topic in NL. (Remco, as you know, being part Dutch, I was rooting for NL. Too bad...)

In case the story is deleted, here is a screen shot and the text of the story. 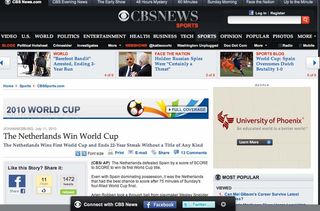 JOHANNESBURG, July 11, 2010 (CBS/ AP) The Netherlands defeated Spain by a score of SCORE to SCORE to win its first World Cup title.

Even with Spain dominating possession, it was the Netherlands that had the best chance to score after 75 minutes of Sunday's foul-filled World Cup final.

Arjen Robben took a through ball from playmaker Wesley Sneijder and went one-on-one with goalkeeper Iker Casillas, but his 62nd-minute shot was kicked out for a corner by Casillas' right foot.

Before that, it was Spain that had the best chances to take the lead and win their first World Cup.

Defender Sergio Ramos sent a header from Xavi Hernandez's cross on target, but goalkeeper Maarten Stekelenburg made the save in the fifth minute. Spain striker David Villa's left-foot volley from Xabi Alonso's cross then hit the side-netting in the 12th.

Spain ended a 44-year barren spell when it won the 2008 European Championship and can become only the third team to be world and European champion at the same time.

Spain's exquisite talent is reminiscent of that of the Dutch when "Total Football" carried them to the 1974 and '78 finals.