I sent a tweet this morning as a result of a pitch that I received though email from Mktgbuzz. The pitch offered 50% off a PRWeb press release for the first 500 people who filled out a form.

Very soon after I sent the tweet, PRWeb tweeted saying that the organization making the offer was not a PRWeb sanctioned partner. PRWeb does have several affiliate programs, but this organization was not part either PR Web Commission Junction or PRWeb Linkconnector. 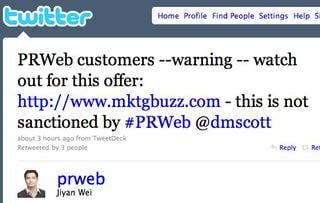 I wish that I had scrutinized the offer more carefully before tweeting. But I failed to do so. My fault.

In today's always on, Twitter enabled world things happen so quickly. Now, I'm not making an excuse for sending a tweet in haste, but…

When you get a few hundred emails (including dozens of email pitches) each day, plus dozens of Twitter Direct Messages, a hundred or more Twitter @ replies, Facebook messages, and whatnot each and every day, you make a lot of quick decisions.

Sometimes a deep breath and a moment of reflection are in order.

You can't take back a tweet. Yes, you can delete it, but when it makes it into the various Twitter clients, search engines, gets re-tweeted and the like, it never completely disappears.

What I did when I got the PRWeb tweet was immediately contact the person at Mktgbuzz who sent me the pitch for clarification.

Then I tweeted several times to clarify what I was hearing from PRWeb and I also sent direct messages to people who contact me about the offer.

Mktgbuzz quickly removed the offer and also tweeted that they were refunding customers' money. Looks like everything will work out in the end.

The entire thing went down in just a few hours.

Yes, our real-time marketing & PR world is an amazing opportunity for marketers.

But the sheer speed that things happen also increases the likelihood of silly mistakes because we all do things so quickly.

Be careful out there.