I've been talking about blogging and ethics for a while. For example, I wrote a post called What would your mother say? Blogging and ethics back in 2006. (BTW - 2006 was about two decades ago in dog… er, I mean Internet years).

The issue keeps coming up. John Cass recently wrote about a blogger at WebEx who posted a review of a competitor's product. And last week, the U.S. Federal Trade Commission published regulations last week targeting bloggers, and a furious discussion ensued.

My friend Andrew Davis Chief Strategy Officer at at Tipping Point Labs has an elegant solution. He suggests a visual code (see draft 1.0 below). It reminds me of how Creative Commons works which I really like. I'd imagine that the icons would link to web based information just like CC does.

I love it. What do you think?? 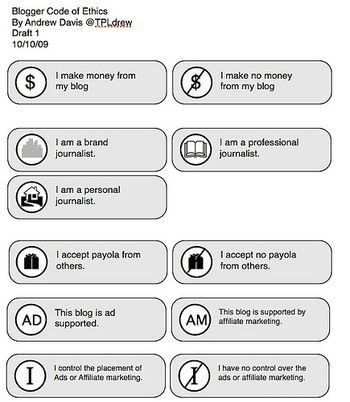 One suggestion Andrew As an author and someone who occasionally reviews books, I’d like to have a clause saying that works such as movies, music, and books that are frequently sent for review to bloggers be in another category than “payola.” The relationship between the media of all types and those of us who create works like books, CDs, and feature films has always included free review copies. (FYI - I get more than 100 unsolicited review copies of books per year.)