Does a new literacy call for a new book model?

When I wrote The New Rules of Marketing & PR, I added the URLs of Web sites, blogs, podcasts, YouTube videos and other links at the bottom of the each page in case readers wanted to go to the sites I was discussing in the book. Many people commented that it was helpful, so I repeated in my new book World Wide Rave.

But now I wonder. Could I have done more?

Zak Nelson asks: "Why aren't books more like websites? Or even magazines, for that matter? Or hell, like comic books?" Zak sent me a diagram of what he's thinking (click the image for an enlarged version). 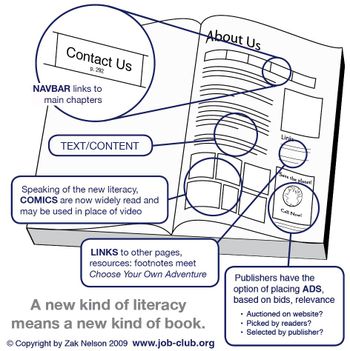 Zak wrote to me while he was reading New Rules… at a cafe in Queen Anne in Seattle.

"Sitting next to a guy pecking away at some code for a web 2.0 site he's working on," Zak wrote. "On my other side two women rue the economy. Across from me a fellow reads the Post-Intelligencer, which will soon go extinct. Classic scene."

Zak says there is a new literacy taking hold, and traditional book publishers aren't keeping up:

"I'm a comics geek," he says. "I love the explosion of new indie comics and high caliber graphic novels appearing on the scene, and selling well. People in general are becoming more literate in comics: with more exposure we are learning how to better read them, and authors/artists are stretching the boundaries of each page and panel. Moreover, comics are typically sold in an affordable, cheap-to-produce format, and are only bound and sold as graphic novels after a series has had its run, and then only if it sold well enough to warrant the cost of creating a book.

Similarly, people are becoming more literate in reading websites, and that neural reconfiguration may well be affecting how traditional books are read and sold (or, unsold as the case may be).

So what if a book read more like a website? What if it looked more like those Choose Your Own Adventure books, with links to other chapters, pages, and even other resources in the marginalia? What if there were paid advertising on the page, but not traditional ads but rather something more akin to Google AdWords, where the placement is determined online in a bidding process coupled with consumer-driven inputs? What if on the printed page, instead of single photos or illustrations with captions, books adapted the concept of the embedded YouTube video, and used a storyboard format--i.e., a comics format--to depict a scene, when sequential visuals are required?"

What do you think? Is Zak on to something here?

Zak Nelson is a marketing and PR professional with five years in the book publishing industry. He is now looking for a new opportunity. He started a Job Club site in early 2009 to bring job seekers in the Seattle area together to share resources, encouragement, and accountability in job searches.