How David Murray found a new job via Twitter

On Monday I posted on something I’ve been thinking about for a long time: The New Rules of Marketing & PR also apply to the job search. In my post Downsized? Fired? Here are the new rules of finding a job I talked about how those looking for a new opportunity need to think not just like the seller of a product (that's what a resume does) but also think like a publisher of interesting information that companies that may want to hire you will find and be eager to consume.

It seems like every article I've read about job search focuses on traditional ways to find a job: write a great resume and network like crazy. While I'm not suggesting that those looking for work should abandon these efforts, there are many really interesting ways to use social media to conduct a job search.

I was particularly excited that David Murray commented on my post, saying that he found his new job via Twitter. Murray agreed to share his story here.

Murray says that after being laid off, he immediately did the traditional thing, completing his resume and calling people. But he realized that he would have to change gears and pay attention to blogs, social networks, and online communities.

He already had a Twitter account @DaveMurr, so he reached out to his followers and publicly announced that he was looking for work. 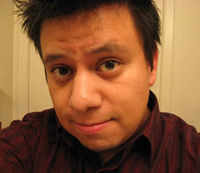 "I guess you could say I used a new tool for old school networking," Murray says. "The response was overwhelming and I received several leads and opportunities that were far more fruitful than my previous attempts."

Murray then hit on a creative way to use Twitter Search in his job search. "I came across Chris Brogan's comment how he used Twitter Search to keep track of his 10,000 followers using RSS feeds," Murray says. "So I simply began entering keywords in Twitter Search like: Hiring Social Media, Social Media Jobs, Online Community Manager, Blogging Jobs, etc. I then pulled the RSS feeds of these keyword conversations into Google Reader and made it a habit to check these first thing in the morning everyday."

Murray came across conversations related to his keywords and if something sounded like a good fit for him, he took the liberty of introducing himself via Twitter. "Many times when inquiring about the open positions, the jobs had not been officially posted," Murray says.

How cool that on Twitter you can express interest in a job opportunity that hasn't even been announced yet? It’s like inside information.

As Heather Huhman, who writes the Entry Level Careers pages for Examiner.com says: “The Internet is changing just about everything – the internship/entry-level job search included. Gone are the days of printing out your cover letter and resume on 'special' paper, sticking both in an envelope and mailing the application package off. We are officially in the Job Search 2.0 era."

Some people might argue that this technique only works to find jobs related to social media and online marketing (like Murray did). While it's true that social media savvy people like Murray are first to use these techniques, I'm convinced that they'd work for many other kinds of roles too. And here's an added benefit. If you're an accountant, or salesperson, or production manager looking for work, then you're really going to stand out from the crowd of 1,000 resumes if you use social media to find a job.

Here's an added bonus tip for reading this far.

What comes up when you Google your name with the name of your most recent employer? Potential employers do that all the time. And you can influence what they see! Remember, on the Web you are what you publish.