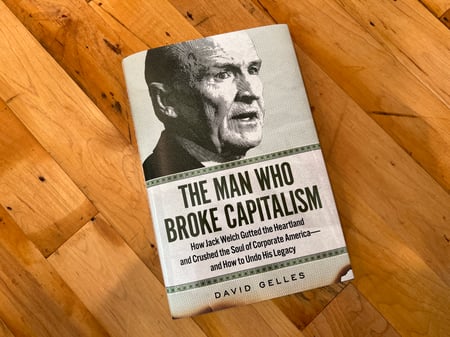 David Gelles new book The Man Who Broke Capitalism is an account of how Jack Welch gutted the heartland and crushed the soul of corporate America - and how to undo his legacy. I learned a ton from this book, and it made me think a lot about the different ways that businesses can be run.

Gells is the “Corner Office” columnist for the New York Times, and I enjoyed his focus on the personal side of Welch (who died in 2020), especially his time as CEO of GE from 1981 to 2001.

The book sets the scene with descriptions of large American industrial companies in the years following WWII. Gells describes the first decades of this period as one where companies took care of employees and focused on creating products that customers would buy.

I recall both my father and grandfather, who worked for large companies in sales and marketing roles when I was a kid, speak highly of their companies. They had great health insurance, a stable job and career, and a pension. The thinking of the day was if you treat employees right, they will do good for the company.

However, in the 1980s when Welch took over GE, he treated labor as a cost instead off an asset.

Welch was quick to fire tens of thousands of people at a time because each time he did so, Wall Street rewarded the move with a short-term jump in the GE stock price.

Are you old enough to remember the 1980s? Ronald Reagan was in the White House, and he fostered a climate that rewarded people like Welch. In the 1987 movie Wall Street, Gordon Gekko told us that greed is good.

Welch and other senior executives had much of their personal wealth in GE stock, so this made them eager to extract profits, quick to slash costs, and unsentimental with employees. Rather than pay themselves 20 or 30 times the average pay of workers which was the norm for CEOs, Welch paid himself hundreds of times average.

In some cases, entire cities like Erie, PA and Schenectady, NY were decimated when plants were closed and jobs either eliminated or moved overseas.

For all this, Welch was named Manager of the Century and was paid accordingly.

The problem is bare-knuckled cost cutting and profit maximization is always a short-term strategy.

Perhaps worse for GE and the MBA-obsessed business people who followed Welch’s lead, the money that was saved through cost cutting wasn’t invested in research and development. Instead, it was used to pay ever larger dividends to investors and to purchase company stock in buyback programs. In fact, according to Gelles, GE under Welch spent more on stock buybacks than R&D.

Another Welch focus was relentless mergers, acquisitions, and divestitures. During his reign, GE acquired one $130 million company every week for 20 years on average and sold off a business every two weeks.

He oversaw the rise of GE Capital as a primary profit engine for the company, moving GE into areas far from its industrial roots, such as subprime home mortgages.

With all the financial engineering, Wall Street was bamboozled. Analysts relyed on Welch to fiddle with the numbers such that he hit his financial guidance nearly every quarter. The stock continued to rise, and Welch grew fabulously wealthy.

When Welch retired from GE, he received a severance payment of $417 million, the largest such payment in business history at the time. In 2006, Welch's net worth was estimated at $720 million.

So powerful was “Welchism” in the business world, that GE executives were prime candidates for headhunters to recruit to run other companies, including Boeing and Home Depot, where the new CEOs worked from the same playbook.

Often the stock prices of companies hiring a GE man rose on the news of the appointment and rose again during a year or two of cost cutting. But then the de-emphasis on R&D and employees would catch up.

Today, decades after Welch broke it, GE has sold off every business except for jet engines. GE no longer makes or sells lightbulbs or turbines, or locomotives, or home appliances, or the products that it sold for a century.

You can’t cost cut your way to prosperity

The primary focus on shareholders at the expense of other constituents including employees, communities, the environment, paying taxes, and the like was the hallmark of Welchism.

The book strikes a hopeful tone near the end, outlining how some (but not all) executives and business schools have learned the many downsides of Welchism.

That so many companies have suffered with “Neutron Jack’s” playbook has finally been noticed and his godlike status in the business world is irreparably tarnished.

The success of companies that reject Welch’s ideas, like HubSpot, Patagonia, Unilever, and others show that responsible capitalism can benefit employees, communities, customers, and shareholders alike.