No Excuses For Not Being At The Top Of Your Game 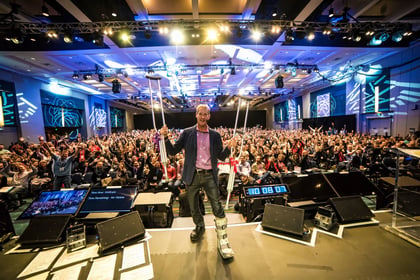 I contacted my friend and speaker coach Dr. Nick Morgan. “Hey Nick, I have a speaker dilemma and I could use your input!” I had a speaking engagement booked at Tony Robbins Business Mastery in Palm Beach a few days later and I was injured. I wanted Nick’s advice for how I should manage my obvious disability while presenting to the nearly 2,000 people in the best way possible.

Alert readers may have read about my surgery to remove a large non-cancerous tumor on my ankle. I wrote a story about my journey: My Personal Experiences with the Medical Marijuana Business and the Opioid Epidemic and posted it on Medium. While I am healing on schedule, I’d be in a “boot” and possibly using crutches during my talk and was concerned about how to handle it.

I’ve been working with Nick for a decade and his advice is essential for my growth as a professional speaker at conferences and events. It’s been really important for me to have a coach I can go to on a regular basis when I need work on some aspect of my speaking skills.

What do you do when 'break a leg" actually happens?

“Nick, help! How should I handle the obvious fact that I am on crutches? I’m worried that it will physically throw off my game. And people will clearly see that I’ve got an injury. What advice can you give me about the situation?”

My wife Yukari Watanabe Scott suggested that I exaggerate the fact that I am on crutches rather than try to hide it. She said to play it up. I thought she was right, but I was worried about people thinking that I was looking for sympathy.

In particular, I wanted Nick’s advice on when should I mention the crutches and boot the first time in the talk and how.

When David called, my first thought was the old theatre adage: “The show must go on.” David makes his living from public speaking, and that means always being a professional. As a professional, as David knows, you show up unless you can’t, and “can’t” in this sentence only means “dead.”

So taking a few weeks’ recovery in the Caribbean was not an option, nice as that sounded. David had to speak.

The next question was, how does he handle the boot (and crutches)? It’s a classic elephant-in-the-room issue, because it’s visible. If David didn’t talk about it, the audience would be distracted for the entire speech, wondering what the problem was.

So he has to talk about it.

But – and here’s the key – he doesn’t have to make it the main event. His talk was not about recent medical advances, or the pros and cons of playing through the pain. Nor was his talk an autobiography. David was talking about marketing, and so the boot/crutches needed to be subordinated to the main purpose of the talk.

That meant that he didn’t want to make the main frame of the talk about the boot. Rather, he wanted to bring it up after the initial opening story and frame, and get to the boot about ten minutes in, give or take.

In that way, he could start the talk on message, frame the purpose of the speech for the audience in the right way, and then, once that was accomplished, deal with the boot. At that point, if there was a way to make the boot relevant to the point of the overall talk, he could spend longer on it. If it was just an aside, then he’d need to move faster, so that the overall flow of the talk was maintained.

So that was my advice. The show must go on, so you have to talk about it. But don’t make it the main event.

How did it go, David?

The conversations with Nick were essential for me to manage the fact that this would be a different presentation than I was used to. I still wanted to be high energy (well as much energy as one can put into a more than two hour speech with a boot on). I was comfortable in the knowledge that I could still perform as long as I was clear in my mind how to proceed.

In the week leading up to the event, I planned to mention my injury onstage 3 times and I worked those mentions into my talk. The first time, as Nick suggested, I planned for about 10 minutes into the talk, just after the opening story and framing of my presentation. I also planned a second mention about 30 minutes in and a final time near the end of the talk.

On the day of my presentation, I used a meal break to spend more than an hour exploring the stage, practicing with my crutches and the clicker at the same time (difficult!), and conferring with the production staff including audio, the video camera operators, and production manger, so we’d all be in synch on my plans.

I’m glad I did, because when I first mentioned my injury, the camera operators knew to zoom in on my boot at that point so the audience could clearly see.

On stage, while my ankle hurt quite a bit, I had mentally prepared. Once adrenaline and the audience’s kind support kicked in I put the pain in the back of my mind. Because I was prepared, I knew exactly when I would mention the surgery and how. Once I got going, I found that I only needed to use the crutches as a prop a few times.

Near the end of the talk, I explained that my injury taught me the life lesson that when you experience a setback, you have to face up to it, plan around it, and – if you want to fire on all cylinders – embrace it. As Tony Robbins says: “It is in your moments of decision that your destiny is shaped.”

I’m glad that I decided to work with Nick and he helped me to weave my injury into my talk.

This post also appears as a cross-post on Nick Morgan's blog.

Speaking of Nick and his advice, he is running his Powerful Public Speaking workshop on March 31, 2017 in Boston. I attended several years ago and it is highly recommended.

Rajiv Sankarlall photo of me on stage. Thanks Raj, I love this photo!

How to Embrace the Creativity of Your Fans: Three Proven Strategies