Just in time for Fathers Day (or a very early start on Mothers Day 2015), I’m offering a special limited-quantity boxed special edition of Marketing the Moon signed by Gene Cernan, the last man to walk on the moon who wrote the foreword to the book as well as signed by my co-author Rich Jurek and I. See below for details.

Marketing the Moon has been out several months now and has gotten some great buzz including from Buzz himself – Aldrin that is, who spent an hour with us several weeks ago discussing it.

We scored a coveted “one sentence review” in the Sunday New York Times (“U.S. government goes ‘Mad Men’ on Apollo, gets it right”), a half page write-up & photo in the Wall Street Journal, several NPR radio interviews, and many print and online reviews. Thank you to those who blogged it, tweeted, or posted online reviews!

This week, Hans Rollman wrote in PopMatters: “it’s a book for the coffee table, the office desk and the lobby.” That's what we like to hear, our art is suitable for display.

One of the coolest parts of this project has been working closely with many Apollo astronauts. We’ve interviewed or spoken with more than half of the humans who walked on the moon as part of this project. 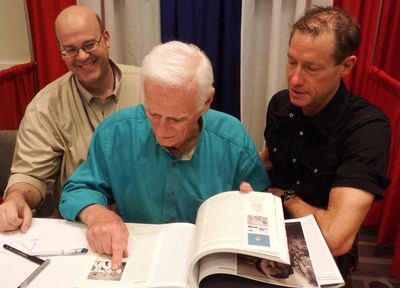 Rich and I produced a very special edition of the book. Only 100 copies were produced, with many already given away. The books include a beautiful slipcase and custom outer box. Best of all, they are signed by Apollo moonwalker Gene Cernan, Commander of Apollo 17 and the last man to walk on the moon. In this photo, Rich and I are discussing the book with Gene.

Rich and I spent a great deal of money on this special edition. It is our art and we are not making profit from the project.

We’re offering them at $295 each, which includes USPS priority shipping in the USA. If you are outside the US, please email me for the cost to ship to you. We can take PayPal or a credit card.

Please email me right away at david@freshspot.com if you want to grab one while we have some left.