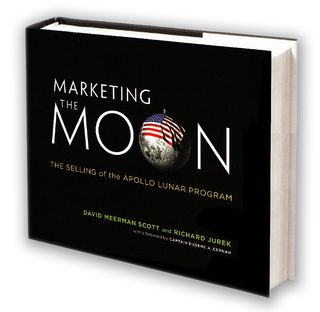 Several weeks ago I announced my newest book Marketing the Moon which I wrote with Rich Jurek. The book tells the story of the most successful marketing and public relations campaign in history, featuring heroic astronauts, press-savvy rocket scientists, enthusiastic reporters, deep-pocketed defense contractors, and Tang.

If you pre-ordered a copy, thank you! Short story = the books are still on the dock waiting to be unloaded.

The long story includes snowstorms, busted cranes, and a severe shortage of salt.

Yeah, I know I told many of you that your books would have arrived by now. Whoops. I sort of forgot that printed books need to be, well, moved!

In today’s always on, real-time world it is easy to forget that physical stuff still has to be physically delivered.

1) The books were printed in Asia and are absolutely beautiful. Scott-Martin Kosofsky, who worked on every aspect of the design and production, chose high quality paper, process, and materials throughout.

2) Then the books needed to be put into a container and loaded onto a ship.

3) The ship needed to travel halfway around the world. I was fascinated to watch in real-time via its GPS coordinates as the MSC Rania, a Panamanian flagged 94,000 Gross tonnage container ship made its way to New York with our books. I’d tell Rich something like: “Hey the books are now in the Mediterranean Sea between Sicily and Tunisia!”

4) Since we knew the destination was the Port of New York we could accurately predict when the ship would arrive, figure when they’d be offloaded, and when they would arrive at the MIT Press warehouse. That allows us to predict when books will ship from retailers like Amazon.

Or not. Because we didn’t figure on: 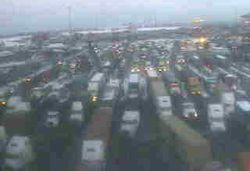 Snow! The several large snowstorms disrupted traffic at the Port of New York, backing up trucks and slowing down shipments. Me: “Snow happens. It’s the US Northeast. Why don’t they deal with it?”

6) The terminal’s crane experienced some mechanical problem due to temperature. Me: “Really? The crane busted?!”

7) A shortage of rock salt used to melt snow. Me: “Now this is getting ridiculous!”

Turns out the books are still at the port waiting to be delivered. I hope that books will reach you in early March. But at this stage, who the heck knows?

I write a lot about real-time content. This book shipment is the opposite of real-time. If its not one thing its another.

I know “We can put a man on the moon but we can’t...” is an enormous cliché. But considering the subject of our book, it’s an apt title for this post, don’t you think?