Do not delete your content because it should live forever

UPDATE - March 30, 2013 - Air New Zealand tweeted a clarification to us which I have saved as a screen shot pasted below.

As I was working on a writing project this week, I went to back to take a look at a YouTube video that I talked about on my blog in an August 2010 post titled Awesome Air New Zealand All Blacks rugby safety video. I've mentioned the Air New Zealand - Crazy About Rugby - Safety Video in one of my books and in talks around the world. Remarkably, this had been an airline safety video (you know, how to buckle your seatbelt) with over one million YouTube views!

Even more remarkably, it seems Air New Zealand has removed the video because it is now marked as private. What a lost opportunity for Air New Zealand.

Much of your web content should live forever. This video would have continued to rack up views, make people laugh, and serve to humanize Air New Zealand forever. But now it is gone. In reviewing the Air New Zealand YouTube channel, which was created on May 31, 2006 and has 24 million total views, it seems that all videos older than 3 years have been removed. Why in the world would they do that?

I frequently witness this silliness with conference organizers who have one URL for their annual conference and each year delete the prior year's content and replace it with new. Don't do this!

The media in your industry, speakers, bloggers, and exhibiters all link to the conference site and if the content is deleted as soon as the conference ends those links break.

The SEO benefit of many links

Your Search Engine Marketing benefits from multiple pages with many inbound links. Cultivate your content with care and it will serve as a marketing asset for years to come.

UPDATE: Here is what Air New Zealand said about the deleted video. 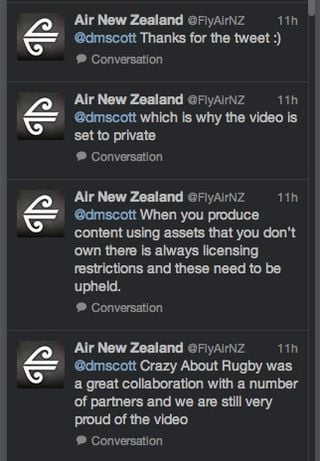 Back to the Basics: Nobody Cares About Your Products (Except You)