How to do something audacious 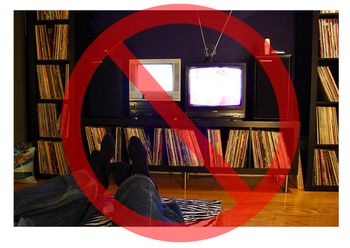 According to Nielsen, the average American spends 158 hours each month watching television(!!).

In a typical working lifetime from age 20 to age 65, based on these stats, the average American spends more than nine full years staring at the box.

You know where I’m going with this...

Cut out television and you can do anything

People frequently ask me how I find the time to have written 8 books in a decade.

I don't watch television at all (except in the morning when I am on my elliptical trainer).

Write a book, start a company, run a marathon, establish a nonprofit, build a house, play the piano. You can do these or anything else you care to do!

If you believe Malcolm Gladwell's idea in Outliers - that you need 10,000 hours of practice to become world class at a task - consider how damned easy it is to find the time! Just cut out television for 5.3 years.

photo credit (without the "no" symbol): Kathleen Farley via photopin cc