It didn't work with music: The music industry killed Napster and sued 16-year-olds to protect their dying business model of selling "albums" via top 40 radio. Instead of understanding the immense power of social media like YouTube as a marketing tool to sell single songs (iTunes) and streaming subscriptions (Spotify), the music industry honchos preferred to destroy in a ridiculous attempt to save the status-quo. Listened to top 40 radio recently?

It didn't work with email: I get many times more unsolicited (and illegal) email than I did prior to CAN-SPAM. Tons of it from legitimate companies that should know better. How's that email legislation working for you?

It's not going to work for movies: Now the silly politicians who wouldn't know a social network if it bit them in the ass are at it again with SOPA & PIPA that are trying to legislate "protection" for their friends in the movie industry.

SOPA legislates censorship (yes censorship – like in North Korea) in an attempt to get legitimate businesses like mine to stop linking to pirate sites. As written, the regulations suggest that if just one of the nearly 10,000 comments on this blog point to a URL that allows illegal downloads that I could go to jail.

Just like with CAN-SPAM, these bills won't shut down pirate sites. They bad guys will just set up shop at another URL and continue their criminal activities, while law-abiding companies will be on the hook and every information consumer will suffer.

SOPA & PIPA are not about copyright. It is about protecting a dying business model.

I'm a content creator too. I get it. I support my family by being able to sell content and I certainly don't want my books stolen on the Web. I've found hundreds of sites with free pirated copies of The New Rules of Marketing and PR and my other books. But that doesn't mean I want to shut down the search engine that led me to those sites.

This isn't about stealing for the movie industry bigwigs and their high priced lobbyists. It's about desperately trying to maintain the old familiar business model that afforded them a lifestyle of Armani suits, lunch at Nobu and limos. It didn't work for music and its not going to work for movies.

The winners in technology transformations are those who embrace change, not the old-guard that tries to legislate protection for their dying business model.

Today Wikipedia is dark. Google has their logo blacked out. Many other sites are protesting by curtailing service for a day. Here is a link to Wikipedia's SOPA informational site and here's link to Google's SOPA / PIPA microsite. 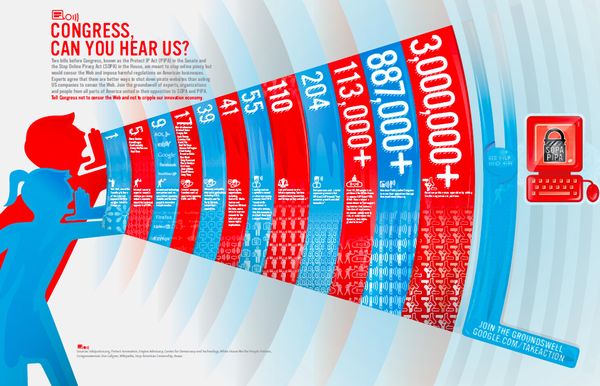