Japanese language edition of Marketing Lessons from the Grateful Dead

Today, the Japanese language version of Marketing Lessons from the Grateful Dead: What Every Business Can Learn from the Most Iconic Band in History was published.

If you liked the English language version and read Japanese please check it out. If you have Japanese colleagues who are marketers or music fans, please pass along. If you are a fan of great design and the Grateful Dead you might be interested even if you don't read Japanese.

My co-author on Marketing Lessons from the Grateful Dead (and HubSpot CEO) Brian Halligan and I both lived in Tokyo in the 1990s, so having the book in Japanese is sort of a homecoming. It has been an exciting project and the finished product is absolutely stellar.

Here is the Facebook page for the book and here is the Amazon Japan page. (As of this writing, the book is ranked number 29 on Amazon Japan among all books they sell). In addition, you can check out an interview with me in Wired Magazine Japan.

Normally I don't write about each translation of my various books (so far nearly 30 languages), but this one is special for a number of reasons.

The book was produced with a true all-star team. Shigesato Itoi corralled the team to create the book and he wrote the foreword. Itoi-san is a popular cultural figure in Japan who is a pioneer in Web content creation. He's got a remarkable 430,000+ Twitter followers @itoi_shigesato and his site is one of the most active in Japan. I'll be interviewing him for an upcoming blog post.

Itoi-san brought in his friend Shin Sobue to design the book. His book creations are so popular that some of his fans buy his work no matter what the topic of the book! He used fantastic fonts (think late 1960s Haight-Asbury meets Japanese) and managed to capture the improvisational nature of a Grateful Dead concert in a book. Amazing.

The Japanese language version was translated by none other than my lovely wife Yukari Watanabe Scott. Yukari, who has quite the following herself on Twitter @YukariWatanabe and her blog, has tolerated my Grateful Dead fandom since we met in Tokyo nearly 25 years ago.

The book was published by Nikkei BP, which also published the Japanese edition of The New Rules of Marketing and PR and will soon bring out Real-Time Marketing & PR in Japanese.

Like the original English-language edition, this book features awesome photos by my friend Jay Blakesberg, who has photographed the Dead since the late 1970s. 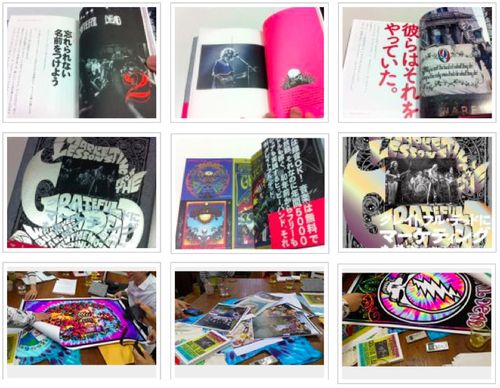