UPDATE March 22, 2011 With the SXSW festivals winding down, $100,000 has been raised by this effort. Congratulations to all involved.

UPDATE March 13, 2011 sxsw4japan.org was started by Leigh Durst (@livepath), RobWu (@robjwu) and Deb Ng (@debng) in the SXSW blogger lounge. It was not an effort of the organizers of the SXSW festival. So far, over $12,000 has been raised.

++++++++++
I'm at the South-by-Southwest festival in Austin Texas now having fun, going to parties, meeting people, and I am giving two talks.

SXSW is all about community, so it is great that we’ve come together to support the people of Japan with a real-time .ORG site at sxsw4japan.org and @sxsw4japan Twitter feed to raise funds. As of this writing, nearly $10,000 has been raised.

This is all about real-time!

The disaster happened yesterday. The site went live the same day. And within about 24 hours, nearly the entire fundraising goal has been reached. 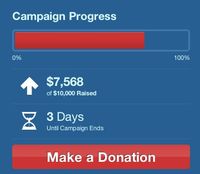 A CNET article talks up my friend Hugh Forrest, SXSW interactive director, as he kicked off the campaign. (I went to college with Hugh). "Can the SXSW community raise $10,000 for Japan in 4 days? Of course we can," the sxsw4japan site urges attendees. "We at SXSW Interactive can make a difference. We can raise funds for the American Red Cross to provide disaster relief in Japan. Donate now to the American Red Cross or create a fundraising page to raise support."

I'm constantly amazed by the power of real-time. What can it do for you?

NOTE: Some of you may know that mu wife Yukari Watanabe Scott is Japanese and that I lived in Japan for seven years. All our friends and family are safe.