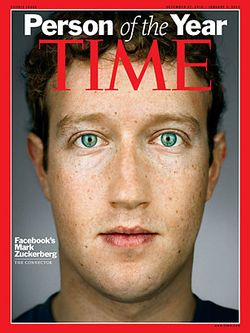 Time Magazine just announced Mark Zuckerberg as Person of the Year for 2010.

Excellent choice in my opinion.

Zuckerberg built a company from scratch that now serves a half billion people worldwide.

But what really got me thinking is how the two media properties - Time Magazine and Facebook – are so different.

One is in decline. The other is on top of the world.

When I was growing up, Time Magazine was relevant. We subscribed at home and I read it every week from the age of about 9. People talked about Time Magazine articles at school and at work. I even cut out the cover of each issue for about a decade and saved them. The magazine was thick and meaty with tons of ads.

Where is Time Magazine now?

What's more, at a time when news outlets across the United States were shrinking dramatically, upstart media companies focused on real-time like TMZ grow from zero to $25 million in revenues between 2005 and 2008.

Why do upstarts like TMZ, Politico, and Bloomberg now beat the likes of Time Magazine, People magazine, and the Washington Post? At a time when Americans are consuming unprecedented volumes of news and information online, why did more than 15,000 people across the United States lose their newspaper jobs in 2009?

I would argue that focusing on real time is critical to achieving a sustainable business model in media.

Zuckerberg built Facebook on instant status updates. You can see what's going on with your friends right now.

So why can't incumbent media companies like Time make the jump to real time?

My own view is that these organizations are burdened by cultural habits deeply ingrained by their manufacturing processes, by the news cycles they follow. For newspapers it's the daily print deadline. For TV news, it's the prime time broadcast. For the weeklies like Time, production cycles are even longer.

It's not just the media business.

Across the economy, people are finding success by understanding the power of now. The power of real time is at work in your business, too.

Much more on this topic here.