Rob Barraco on the Dead, taping concerts, and building a fan base

Rob Barraco plays keyboards and vocals for Dark Star Orchestra. From 1999, Rob has been part of Phil Lesh and Friends and in 2002 he joined with the original members of the Grateful Dead for the Alpine Valley reunion shows and then toured with them in 2002 and 2003.

In this video shot backstage at the Gathering of the Vibes festival I talk with Rob about touring with the Dead, the phenomenon of the tapers, and what that means to promoting a band and building a scene.

“It was genius to allow [taping] because it propagated the whole scene.”

“Going to Dead shows is like your last chance to join the circus before you have to give it all up and go onto adulthood.”

“The scene is bigger than the music and the musicians.” 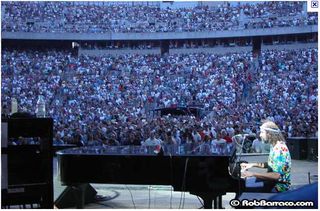