The Plane Truth: Brand journalism and the new Boeing site

The Boeing Company recently launched a completely new approach to the Web.

The dramatic shift in direction brings what was a dull technology and product focused site to one focused on brand journalism, with interesting stories about people.

Brand journalism is the creation of videos, blog posts, photos, charts, graphs, essays, ebooks, and other information that deliver value to your marketplace. Brand Journalism is not a product pitch. It is not an advertorial. It is not an egotistical spewing of gobbledygook-laden, stock-photo enhanced corporate drivel.

The new Boeing site does an excellent job at putting a human (and canine) face on the company. 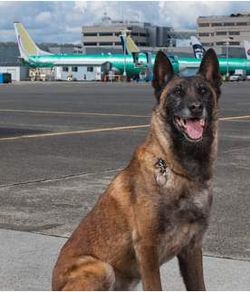 One of the featured stories as I write this is Rocky earns his rest, about a Belgian Malinois, who served for 56 "dog years" as a Boeing explosive detection dog.

"Rocky's story is unusual and we never would have used him on the site before," Todd Blecher, Communications Director, at The Boeing Co tells me. "Now on our site we show there are real people who work in the company. And we are willing to talk about them even if they are a dog."

Todd heads up the editorial team at Boeing, gathering story ideas from all over the company. An interesting aspect of the brand journalism approach now used at Boeing is that each of the stories carries a byline of the person who wrote it.

"The bylines are another way that we humanize the stories," Todd says.

I particularly liked Freezin' in Florida, about testing the 787 Dreamliner in the largest refrigerated hangar in the world. The hangar simulates temperatures as low as minus 65 degrees Fahrenheit or as high as 165 degrees Fahrenheit. There is a fascinating two-minute video of the very, very cold airplane featuring the people who are testing it.

"Rather than have a standard news release that describes testing, we take you inside the hanger to actually show what people have to do to freeze the airplane," Todd says. "No airplane comes together without the people who work on it. Now we're talking about our technology from the perspective of the people."

This is a terrific example of brand journalism from a company whose products I fly in almost every week.

I'll be keeping an eye on the site and look forward to watch what comes next.