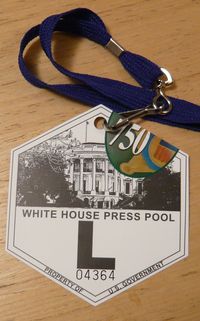 I scored a press pass to hear President Obama speak at a rally for U.S. Senate candidate Martha Coakley today. Coakley is locked in tight race for the seat held by Ted Kennedy in Massachusetts. I'm a fan of spectacle, Democratic or Republican, so I went to soak it all up.

I guess I shouldn't be surprised that many of the reporters I met were avid users of Twitter. You'll see in this very short video what I mean as I show you the view from my perch in the press area.

For example Kerry Picket who writes for the Washington Times was tweeting as she was listing to the speeches and writing her articles. She says she uses TweetDeck to send occasional quotes and to keep a record of what she’s thinking during a speech – like a kind of note taking.

Sample @KerryPicket tweets from the rally:

- Obama invokes "fired up" here it comes
- Obama: Martha's going to make sure you'll get your money back...
- Obama: Last year I kept a campaign promise to cut taxes for 95% of Americans..(WHOA!)
- Disruptor in the stands
- Obama almost forgets Sen. Kerry's name

Here's a video of President Obama working the ropeline.