New Rules, new ideas, and a few secrets: Second Edition of my bestseller

The SECOND EDITION of The New Rules of Marketing and PR is in bookstores now!

The book has gone through a complete re-write. See below for what's new.

Here is my first secret

I didn’t spend a single penny advertising or promoting the first edition of The New Rules of Marketing & PR.

Well over 1,000 of you have blogged about the book since the first edition published in 2007. You told your friends, you tweeted, you talked the book up in some way. The power of the ideas I talk about in The New Rules of Marketing & PR are what propelled the book to the BusinessWeek bestseller list and kept it there for six months.

A stat I am particularly proud of is The New Rules of Marketing & PR has been the number one Public Relations book on Amazon for approximately 910 days. Over nine hundred days. I’m stunned. And you did that by talking up the book.

Thank you for making The New Rules of Marketing & PR such a success that it needed a second edition. 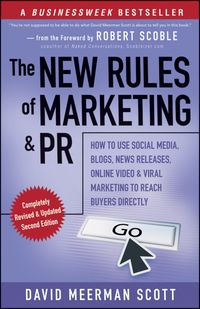 The second edition of the book has gone through an extensive rewrite. Of course, I have checked every fact, figure, and URL.

But I've also listened. In the past two years, I've met thousands of people like you who have shared stories with me, so I have drawn from those experiences and included many new examples of success.

While including so many new stories and examples has resulted in my removing many of the less interesting originals, I'm convinced that these exciting replacements are even more valuable. And for those of you who have read the first edition, you'll still find many fresh ideas in the second edition.

I've made some major additions as well. When I was writing the first edition of the book back in 2006, Facebook was only available to those with a .edu email address (students and educators), so I didn’t feature Facebook. And Twitter didn’t even exist at the time I was researching the first edition. So I have added extensive new information and examples on Facebook, Twitter, and other social media sites.

In fact, the rise of the term social media has been so strong in the past few years that I’ve even changed the subtitle of the book to include it.

Here is my second secret.

As I was writing the first edition back in 2006, I was a bit unsure of the global applicability of the new rules. Sure, I'd found a number of anecdotal stories about online marketing, blogging, and social networking outside of North America. But I couldn't help but wonder: Are organizations of all kinds reaching their buyers directly, with Web content written in languages other than English and for cultures other than my own?

The answer is a resounding yes! About 25 percent of the book’s sales have come from outside the United States. As I write this, the book has been or is being translated into 24 languages.

I’m also receiving invitations from all over the world to speak about the new rules. In the past year, I’ve traveled to nearly a dozen countries, including Saudi Arabia, the UK, Estonia, Latvia, Turkey, Croatia, the Netherlands, Australia, New Zealand, Japan, and the Dominican Republic.

So I can say with certainty that the ideas in these pages do resonate worldwide. We are indeed witnessing a global phenomenon.

Thank you again for your help and support.

Please consider talking up the SECOND EDITION The New Rules of Marketing and PR.

I sure do appreciate all that you've done for me.

You've changed my life. And I'd like to think that people who have implemented the ideas in The New Rules of Marketing & PR have changed their lives too! (How cool is that?)