I was just on Technorati and saw a banner ad that caught my. They almost never do. I probably click on one banner a month.

I was attracted first to the Flying Vee with the universal symbol for "no". Then the headline "Parents against reprehensible metal music." 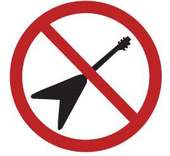 "Cool," I thought. Tipper Gore wannabes on the rampage. This will be fun. So I clicked.

As the father of a 15-year old daughter who likes obscure metal sub-genres and songs with "explicit" lyrics, I couldn't wait to share this with her so we could both get a chuckle. One of the questions in the banner is: "Does your teen show any of the following signs: Wears excessive amounts of black."

Um, yup. Lots of black clothing in my house. But on dad as well.

Imagine my surprise when the banner linked to a site for Toyota Matrix. At first I thought that The Double Click ad server was on the fritz. But then I realized, holy cow, it's a bait and switch banner!

I was immediately incensed. It reminded me of those annoying "You are the 1,000,000th visitor! You won! Click here!" ads.

But then after a moment, I decided it was pretty cool. I Googled the phrase and found a nifty little site ParentsForPARMM.com "Our censor sensor is always on high alert!"

So here I am writing about it - promoting the site and no doubt sending them a few thousand more clicks. I guess that's what they wanted, right? Well, then it worked.

So what do you think? Is this a reprehensible bait and switch? Or just plain fun? What would the transparency police say?