I really wanted to hate Google Plus

The last thing I need is a new social network. So when I got a coveted invite to Google Plus, I really wanted to take a look, find out all the reasons why it sucks and then walk away.

But I can't walk away. Because I like it.

You can't go to every party.

I love NOT accepting requests from people to join random social networks.

Google+ (or Google Plus) is a Facebook-like application. It links to your other Google bits and pieces such as your Google Profile.

Here is my Google+ profile

Here is a demo of Google+ 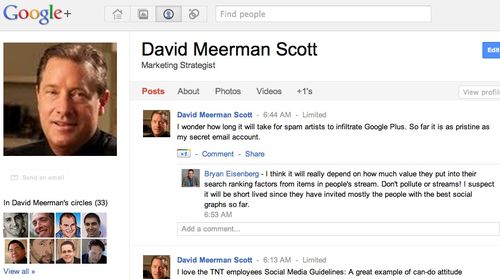 The best part of Google+ for me (so far) is "Circles."

Circles allow you to create groups of people to follow, but unlike Facebook, the other person need not reciprocate. So I added a bunch of people to my circles who I know and I am adding a few more every few hours. But I plan on being very selective.

Google has done an interesting thing with the rollout of Google+. They’ve initially invited people who are very social. So I immediately found people I wanted to be connected with. And they found me.

No farm animals or wives of bankers (yet)

I also love that Google+ is pristine from spam artists (so far). I have no doubt that will change, but for now I am not dealing with people who want to transfer millions of dollars into my account or others who want me to join their farm or mafia. I really hope Google can control spam.

It is not a "Facebook killer." There is no way my teenage daughter and her friends will switch. Rather it is a new way for me to share with people I know personally and who I respect.

Here are a few interesting posts to check out

Robert Scoble: Why yo momma won't use Google+ (and why that thrills me to no end)

David Naylor: Google releases new SpamBot in the form of Google Plus