My family and I recently visited the jungles of Panama with Nathan Gray and Lider Sucre of Earth Train, staying at their beautiful Mamoni Valley Preserve campus.

During my visit, I was able to reflect on what the natural world can teach about leadership.

What can biodiversity teach us about leadership? 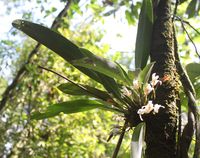 In the jungle, it's not just survival of the fittest. There are many systems that work on cooperation such as an orchid growing on a tree or a hummingbird with an evolved beak for sipping nectar from a particular species of plant. These niche organisms happily live with few or no predators.

A parallel that I draw to the business world is that a great company can be founded to take advantage of a niche. If you’re clever, you won’t even have competitors. Yet so many companies try to be the dominant species in a large category is really tough.

Another example Nathan talks about in this short video is social organization. We saw an ant swarm in the jungle – hundreds of thousands of individuals all purposely working without any clear leadership, no command and control, no layers of managers who only manage others.

Direct link to the video. Nathan Gray, co-director and founder of Earth Train, discusses the tremendous biodiversity in Panama tropical rainforests. Earth Train’s Mamoni Valley Preserve is a campus, a place to reconnect with nature and learn about leadership.

Tropical Rainforests are the world's treasure trove of biodiversity, containing as much as 80% of the world's unique plant and animal life. To Earth Train: “the tropical rainforests of the Mamoni Valley Preserve are a campus - a place to reconnect with nature and perform restoration on the natural environment and on ourselves, to support the development of leadership in a new generation that will base its economic, cultural, and spiritual survival on partnership with nature, instead of domination of it.”

Nathan, his Panamanian naturalist (and Harvard MBA) partner Lider Sucre, and I are cooking up an exclusive CEO and executive-level "Nature and Business" event at Earth Train’s Mamoni Valley Preserve in late January 2012. We’ll kayak, hike, relax, discuss, debate, and do some deep thinking around what nature can teach us about business leadership. Let me know if you might be interested in attending.