My first job was on a bond trading desk in the mid-1980s. I was mesmerized by the real-time "scrolling" news feeds from Dow Jones and Reuters (most recent story auto-magically appears at the top of the list of headlines).

"Wow," I thought, I am seeing the news as it is being reported with no delay at all!

In fact I thought this was so insanely cool that I worked at Knight-Ridder Financial in the late 1980s and early 1990s. KRF was a pioneer in real-time news for the commodity and financial markets. I was based in Tokyo and then Hong Kong. I managed the effort to grow the news and data feeds in the Asia markets. 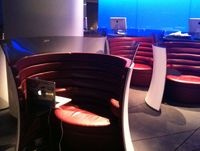 As an aside, I am back in Asia for a few days and I am writing this post from this awesome work pod in the Cathay Pacific lounge in Hong Kong.

In the mid 1990s I joined NewsEdge, a company that pioneered real-time news on corporate desktops (prior to the public Web).

I guess you can say I am a real-time junkie.

Today, when I woke up in Port Dickson Malaysia (I spoke at the Text 100 #DigitalRising meeting) and logged into TweetDeck, my twitter desktop client, I noticed a message that a new version is available which I downloaded. How cool – now TweetDeck is true real-time. 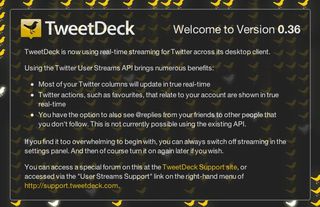 Prior to this version, TweetDeck would update every minute or so or when you manually refreshed. (This older approach is essentially a continuously refreshing snapshot.)

Now, true real-time at TweetDeck means the most recent update in a TweetDeck column automatically appears at the top and continuously updates.

I found for my @ replies, my direct messages, and for the hashtags I follow real-time is great. However, for my follow stream it was way too fast to make sense of.

I'd like to suggest to TweetDeck that they consider making it an option to turn on or off real-time by column. At the moment, you can only do that with a setting that controls the entire app. This forces me to choose between real-time for the columns I use (and no column for the full feed) or no real-time at all and all columns.