First Foursquare check in from space

I'm a space geek. Here's my Apollo Artifacts blog to prove it. And I'm a Real-Time Media geek too. Wrote a book to prove that.

So I find it really cool that today, Expedition 25 Commander Douglas H. Wheelock @astro_wheels became the first human to use a location-based service from space.

Doug checked in from the International Space Station and unlocked the new NASA Explorer Badge. 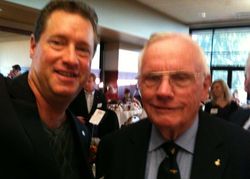 Last month I snapped a photo using my iPhone with the first human to step foot on another planet (Neil Armstrong). That's us in the photo.

I've also met the first human to pee in his pants on another planet (Buzz Aldrin), the first woman in space (Valentina Tereshkova), the first person to step outside a spacecraft (Alexey Leonov) and lots of other "first" space people.

I hope to meet Doug Wheelock one day to toast his "first".

Hat tip to Dianna DiSanto for pointing me to this in real-time.