Lollapalooza with an iPhone 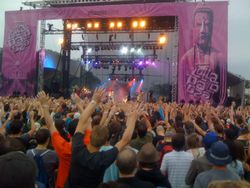 I was a few years late to have made it to Woodstock, but did see a bunch of cool bands in high school and college a decade later: Talking Heads, Led Zeppelin, Frank Zappa, the Clash, Bob Marley, and many more. I love the rock concert thing. I've actually created a spreadsheet listing all the bands I've seen live, which is up to 248 as of this morning because this past weekend, I added 38 bands over the three rainy and then brutally hot days at Lollapalooza.

It's an incredible challenge to figure out which of something like 150 bands on six stages in three days you want to see. With my wife and sixteen year old daughter's opinions in the mix, some strange choices presented themselves like Ben Harper and the Relentless 7 vs Animal Collective? (Animal Collective won out, but it was a bad idea because they were terrible). Andrew Bird vs. Of Montreal? (Of Montreal were fun). Jane's Addiction vs. The Killers (Dad won this one with the oldies of Jane's.) And the weirdest choice of the weekend Snoop Dogg vs. Lou Reed? (We couldn't decide so saw three Snoop songs then high-tailed it to the other stage a mile away just as "Sweet Jane" came on – great decision to see both).

Concerts and your mobile device

I was struck throughout the weekend how different the concert experience is now with our mobile devices. Yes, it’s still all about the music and the experience. But with my iPhone with me (yes, it does work in the pouring rain) a concert is different. Downtime can be spent looking at email. I tweeted a few photos and of course the combination of thousands of others doing the same made for a huge stream for #lollapalooza.

The organizers did a good job encouraging sharing on social media such as suggesting tags for Flickr photos so that you could easily find photos for, say, the Kaiser Chiefs. 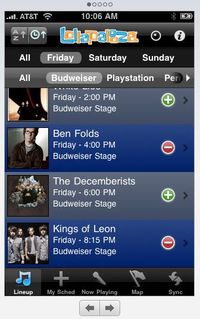 There's an app for that

There was even a Lollapalooza iPhone app. The app contained the full lineups for each day and allowed customization of a schedule. You could also read about the bands and see who is coming up next. This is kinda cool if you end up at a dud set and want to see what’s going on at the next stage.

In case you're interested, my favorite sets from the weekend: Kaiser Chiefs, Band of Horses, Robert Earl Keen, Fleet Foxes, and Quinn Sullivan with Buddy Guy. Hate so say it but Arctic Monkeys and Animal Collective are over-hyped. Lou Reed was good but a curmudgeon – as if he didn’t want to be there. Snoop Dogg’s celebrity is well-deserved, the man can hold a crowd.

1. If your teenager wants to go to a rock festival, take her.

2. How is your business changing because of mobile devices?