"The Art of Asking" the new book by Amanda Palmer 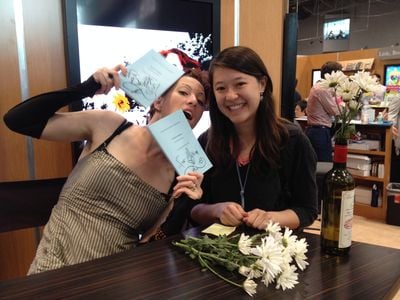 I just finished reading an exclusive excerpt of Amanda Palmer’s new book The Art of Asking, which is scheduled for release in November 2014. My daughter Allison scored signed copies for both of us at Book Expo America. (Trivia alert: both Amanda and Allison graduated from Lexington High School in Massachusetts).

I loved the book excerpt and wish I had the entire thing to devour right now. If Amazon lets me pre-order, I’ll be reading it right away upon release (alas Amanda is publishing with Hachette, the publisher currently in a spat with Amazon).

Just like in her blog, her social streams including @AmandaPalmer on Twitter, and in her live shows, Amanda really puts herself out there in the book. She’s not afraid to show emotion and to be honest. Indeed the book opens with a description about how she asks for a tampon in public restrooms (some co-ed) around the world. Much like her TED talk of the same name, Amanda’s vulnerability is a large part of her charm.

“Almost every important human encounter boils down to the act, and the art, of asking,” Amanda says.

She asked as she wrote the book, such as this ask of her fans on her blog Moar book help, it's question time again! "SO... the questions... what do you think men have a hard time asking for? -and- what do you think women have a hard time asking for? think deeply about this. it’s a trick question. and... GO! discuss." When I checked there were over 100 comments and many answers.

I’ve been a fan for more than five years, first writing about Amanda in this post, which includes a video discussion about social networking. (If you watch... Alert! I was 50 pounds heavier then.)

A memoir of human interactions

We learn a great deal about how Amanda, using only her eyes, asked for human connection (and money) while remaining motionless standing on a box in the middle of a busy city dressed as a white-faced bride. While we learn about asking, the stories from this period in her life are about human nature. What makes a person stop and make eye contact with a street performer? Why are some people compelled to kick in a dollar or two? How do these ideas lead to a music career based on fan interaction?

After reading about Amanda’s work as “The Bride”, I’ll never look at street performers the same way again. If the performer is interesting I stop. I’ll catch the eye. I’ll drop in some cash. I’ll forge a momentary human connection.

Celebrated by many (and derided too by some) because of her social media success - a million Twitter followers and a very active blog, Tumblr, and whatnot - Amanda’s fans propelled her to score the most successful music launch in Kickstarter history. She divorced her record label, struck out on her own, and by asking, she raised well over a million dollars for her album Amanda Palmer and The Grand Theft Orchestra, Theatre Is Evil. (I backed the album at a level that got me to an album launch party and rock show in Boston.)

As a marketer, I was intrigued to learn more about the Kickstarter in the book. Was there some “secret”?

Of course, I knew the answers before I even cracked the book. Social media success isn’t about social media at all. It’s about communicating with fans, putting yourself out there, being vulnerable, and sharing the most intimate moments. There are no secrets. And no shortcuts.

Some of the ideas Amanda explores in The Art of Asking:
How do we ask each other for help?
When can we ask? How often?
Who’s allowed to ask?

“We, as 21st century human beings, have an incredibly hard time asking for certain things,” Amanda says. “Something, somehow, has blocked us from feeling like we can turn to one another for help.”

There’s a wonderful riff in the book about how artists connect the dots. Amanda asks: “Have you ever thought about that THIS looks like THIS?”

And I’ve written about it in my books and in posts like Great content creation ideas come from seeing patterns.

Connecting the dots. What it’s like to be an artist. Sharing. Asking.

I was so glad to see parallels between my work and Amanda’s.

As I was reading, I kept coming back to the idea that what I’ve been doing for the past decade – writing books, delivering speeches, engaging on social networks – is my form of art. The more I’ve thought of my work as art, initially prompted by Seth Godin's writing, the more fun I’ve had and, I hope, the better I’m able to connect with audiences.

And isn't that true of all of us? We all create art of some kind and connect with other people on a human level.

The themes explored in this part of the book are similar to those of Seth and Chris Brogan. I wrote a little about these ideas in a post a few months ago Being a Freak and Making Art.

The Art of Asking

In his book The Ocean at the End of the Lane, Neil Gaiman (Amanda’s husband) included this dedication: "For Amanda, who wanted to know."

I wonder how many people wanted to know details about Amanda’s early life. About being The Bride. About how she became who she is. Did Neil? Fortunately Amanda shares.

I’m predicting that there will be two bestselling authors in the Palmer / Gaiman household come November because The Art of Asking is that good.

Amanda: Thank you. I see you.

How I Saved 250 Hours Using TextExpander