The End of Big 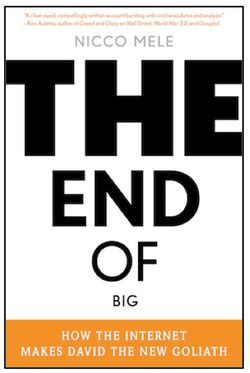 Last night I finished my advance readers' edition of The End of Big: How the Internet Makes David the New Goliath by the super-smart Nicco Mele. The book releases here in the U.S. on April 23, 2013.

I enjoyed Nicco's important book very much, but not because of the frequently discussed details about how the Web allows anyone to publish and be seen. No, that's obvious. Instead what I particularly liked was his deep dive into less obvious ramifications and the cautionary aspects of the erosion of power structures.

Big is the New York Times book review. The end of big is you reading my book review on my small independent blog or on the book's Amazon page. As Nicco writes: "The end of big replaces the elite, formal, highly capitalized, institutionally backed provider of goods or services with your neighbor the poet / journalist / lawyer / soldier / designer (insert craft here)."

The book has chapters on the end of big in areas I've written about a lot including news, companies, and fun (including music and book publishing). But it also includes fascinating chapters on subjects I know little about such as the end of big government, big politics, and big armies.

Nicco certainly knows what he's talking about. As webmaster for Governor Howard Dean's 2004 presidential bid, Nicco and the campaign team popularized the use of technology and social media, revolutionizing political fundraising and reshaping American politics. Soon after, he co-founded EchoDitto, a web strategy firm whose clients included Barack Obama's successful Senate campaign. Nicco is now also on the faculty at the Harvard Kennedy School where he teaches graduate-level classes on the internet and politics.

All is not rosy

While there are many exciting aspects of the end of big in every area Nicco covers, in each there are also threats. For example, in the world of politics, radical connectivity sometimes makes backing by major parties a liability for incumbents. The rise of fringe groups such as the Tea Party and WikiLeaks are a result of the end of big because the Web rewards extremist views.

In journalism, if we no longer have big news gathering organizations, who is going to fund the big investigative story? Without the Washington Post, would Woodward and Bernstein have emerged independently? Without the Watergate Scandal how would history have differed? These are questions worth asking.

Big is not dead

For example, I note that The End of Big was not self-published. Nicco talks a lot about micro publishing but went with a big publisher (St. Martin's Press) for his own book.

But at the same time, Nicco is running EchoDitto his own small business and he also has a small publishing operation (his blog). He's someone who used small techniques (on the Web) to make both Howard Dean and Barack Obama very big.

When you are ready to dig deeper

As someone who has talked about the end of big marketing and big PR for more than a decade, I find it refreshing to read Nicco's book because it made me think about some negative aspects of our new world.

I have a tendency to be too much of a cheerleader about the rise of small and the end of big, so having this challenge to my ideas has been important to me. Thank you for that Nicco.