With all the talk about the Oreo Super Bowl newsjacking juggernaut, many people think that newsjacking, the art of injecting your ideas into a breaking news story is only for consumer brands.

Joe Chernov vice president of marketing at Kinvey proves that a quick acting B2B company can have equivalent success within their target market.

Early this week, executives at Kinvey, a mobile backend as a service (BaaS) company learned that Salesforce.com was about to enter their market category. They quickly realized this would be big news.

As it turns out, not only did Salesforce.com enter the market, but Rackspace also announced a competing platform on the same day as Salesforce.com. 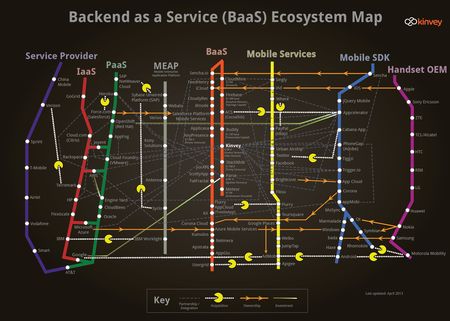 Working late into the night, Joe and Kinvey CEO Sravish Sridhar crafted a blog post under Sravish's byline about the implications titled Backend as a Service Welcomes Vendor #32: Salesforce.com. They also updated their category-defining infographic Backend as a Service (BaaS) Ecosystem Map depicting all of the major players in the market.

The blog post went live within minutes of the Salesforce.com announcement and it triggered a bunch of discussions on Twitter, some involving journalists and analysts.

Soon after, TechCrunch, arguably the most important blog for buyers of services in the Kinvey market, wrote about Salesforce.com and Rackspace's announcements in a post titled Rackspace Rolls Out Its Mobile Plan As Vendors Get Giddy About Backend Data Pipes And Spigots.

The newsjacking success came because the bulk of the TechCrunch article talked about Sravish's post and BaaS Ecosystem Map infographic.

I connected with Joe to learn more about his newsjacking success so other B2B companies can be prepared when a similar news event happens in their marketplace.

"Newsjacking involves more than issuing a timely blog post, product placement, or press release," Joe says. "It also requires actively engaging with journalists and other influencers who are discussing the topic you wish to judo to your advantage."

"He became an active participant in the conversation, and in doing so shared his blog post," Joe says. "It was that exchange that ultimately led to the successful newsjack. My advice to others is all content - even something as time sensitive as a newsjacking post - requires a measure of hustle. It doesn't always get discovered on its own."

I love how Sravish was in real-time discussions himself. Frequently when a CEO jumps in, the credibility factor goes up and journalists pay more attention. But most CEOs are "too busy" and leave "that PR stuff" to staff.