How Raytheon implemented a brand journalism approach to content marketing

I'm always fascinated by organizations that embrace brand journalism, hiring reporters to create content that serves as marketing and public relations. For almost a decade, I've recommended that companies of all kinds model their sites not on their peers' boring old brochure-like approach but rather aspire to becoming like a media site such as Forbes, the BBC, or The New York Times and that they actually hire reporters and editors, not marketers and copywriters, to produce the content.

One look at the Raytheon homepage shows they do exactly that. There are real-time news, images, and a top stories section. And Raytheon is a B2B (and B2G) company!

"You can see our homepage is very much a news operation," says Corinne J Kovalsky, Director, Digital & Social Media at Raytheon. "We've got feature stories and trend stories about cool products."

I've engaged with Corinne for several years on social networks and recently had an opportunity to visit with her and the team at Raytheon headquarters to learn how they built the brand journalism approach to marketing and public relations.

"I'm an ex TV producer," Corinne says. "I did national news up in Canada for the CTV Network for a number of years. I produced the Canadian equivalent of Meet The Press and I have very fond memories of having journalists on staff."

In early 2011, Corinne worked with Pam Wickham, Raytheon's vice president of corporate affairs and communications to implement the brand journalism approach. Pam recognized the opportunity to establish a more robust footprint in digital and social media for the company, an idea that resonated to the very top of the organization.

Once the plan was signed off, Corinne brought on some very impressive talent in early 2012 including Stephanie Schierholz who formerly worked as NASA social media manager. Stephanie grew the @NASA Twitter account from zero to over three million followers and helped organize some interesting "firsts" such as the first live tweet from space and the first Foursquare check-in from space.

Stephanie now works on Raytheon social media including the @Raytheon Twitter feed. Journalists and defense department officials pay attention to the feed and frequently use the content such as this CNNi tweet of a Raytheon image of a high tech helmet to guide pilots of the future.

Soon after, Chris Hawley was hired as managing editor of digital content. Chris joined Raytheon from the Associated Press where just a few weeks earlier he won the 2012 Pulitzer Prize for Investigative Reporting for a months-long series outlining the New York Police Department's surveillance of minority and particularly Muslim neighborhoods since the 9/11 terror attacks. Now, as a brand journalist, he brings the skills he learned at AP to Raytheon.

"I'm helping to build a news operation," Chris says. "We are working at Raytheon just like an AP beat to find interesting stories and tell the world about them in a way that engages. We have bureau chiefs in all of our four divisions. They have certain products that they want to talk about so we try to find new and interesting ways of exploring those stories. And we refine the story ideas, assign writers and we're doing a lot of training on editing and getting those stories out."

Chris has also taken on the role of establishing editorial guidelines for Raytheon and teaching staff about journalism. "We've tried to codify the writing and editing process," he says. "We've come up with a checklist approach to writing a web story that goes through everything from selecting if it's going to be a hard lead story or a soft lead story, right down to which scientific study should I pay attention to when I'm evaluating background information for an article."

The content that Corinne, Chris, Stephanie, and the others on the team produce serve to educate and entertain existing and potential clients. But it also serves the media who with increasing regularity use Raytheon content to create their stories. For example, Gizmodo frequently writes about Raytheon so articles published by Raytheon such as Tiny Satellites To Give Warfighters a Bird's-Eye View of the Battlefield frequently lead to articles such as DARPA's SeeMe Satellites Are a Soldier's On-Demand Eye In the Sky on Gizmodo.

The feature packages produced by Raytheon include text and video plus photography, infographics, and animation where possible. Journalists love the video that Raytheon produces.

"We had a plant opening in Huntsville, Alabama and the factory is one of the most state of the art robotic factories in the world so we focused on the robots in the video," Corinne says. "Mark Thompson, who writes for Time, picked up the video and linked back to our feature and his headline was Elroy Jetson Is Building Missiles!"

While brand journalism at Raytheon has been live for less than a year, there is evidence that the approach is producing results.

"One of our big trade shows is the Association of the US Army annual conference, which happens each October," Chris says. "In the most recent one we decided to go for quality content instead of quantity. We did only three stories compared to more than 20 in 2010, but we really wrote the heck out of them. If you look at them they're really well written and capture trends. And we increased traffic 451% over the year before."

Senior management is noticing too. "Bill Swanson, Raytheon's chairman and chief executive officer, let us build this team and there are some people within the organization who, perhaps, still question why a defense company is doing social media," Corinne says. "Bill has thrown his support behind this young team and has been incredibly encouraging."

To thank the CEO, the team presented him with some Twitter cufflinks. "Well, he was so tickled that wore them during a meeting one day in front of Pam Wickham," Corinne says. "She immediately took a photo and tweeted it out. Bill's cufflinks got 17,000 impressions in 24 hours. Not everybody is that lucky to have a CEO who is so open to new developments and so willing to bring in the right talent."

If you're an organization looking to implement a brand journalism approach to content marketing, study what Raytheon does.

Here I am with the Raytheon team at their Waltham, MA global headquarters. 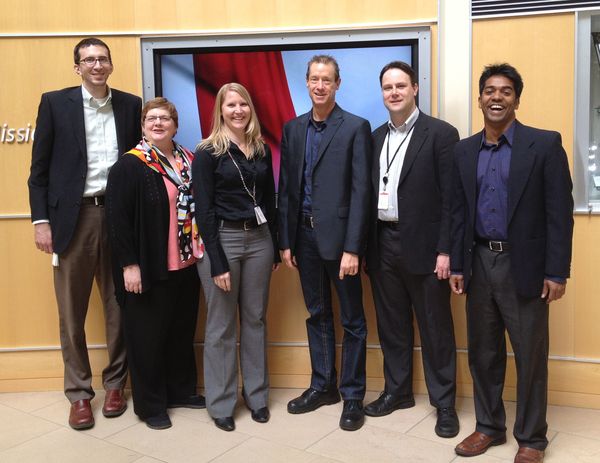