I'd like to step way, way back and look at the big picture of where we are today with our ongoing communications revolution.

The new rules of marketing and public relations are a part of the much bigger and incredibly important communications revolution we're currently living through—the most important in human history.

In my thinking there are three major periods in human communications:

In this period, knowledge is very, very expensive because it needs to be either memorized or written by hand. Most of humanity is illiterate and life is difficult for most.

The era of printed information

Beginning 550 years ago, knowledge became cheap because it could be reproduced in such a way that most anybody could have access to their own books or those owned by others nearby. However, communications was only one way, from a relatively small number of knowledge creators to a large number of readers.

The era of web and mobile communications

In the past 18 years, information has become essentially free and two-way. The big picture ramifications are huge. One thousand years from now, the only two things that will be remembered in the history of the time period we are living right now will be the first lunar landing of Apollo 11 on July 20, 1969 and the development of real-time communications instantly connecting every human on earth with every other human on earth.

The second most important communications revolution in human history

Johannes Gutenberg's invention of printing with mechanical movable type (circa 1439) was the second most important communications breakthrough in history. It meant books could be mass-produced, rather than painstakingly copied by hand. It meant ordinary people could refer to things in books, like laws. These used to have to be committed to memory.

No longer relying on religious leaders for the truth

The invention of the printing press meant that average people could learn to read and understand knowledge for themselves. This meant that they had a choice to no longer rely on religions leaders for the truth. People could decide on their own that, say, the earth really did revolve around the sun.

The printing press brought changes to humanity that lifted Europe out of the medieval period and into the Renaissance.

The single most important communication revolution in human history

Some 556 years later, in 1995, the most important communications revolution began. I choose 1995 because it was the year that Netscape went public on the success of Netscape Navigator, the first popular product to allow easy Internet connection and web browsing.

We're fortunate to be living in this time in history, the time of another important communications revolution. I figure we’re about halfway through it. The first nearly twenty years or so were fast-paced, and things changed very quickly. Usage went from a few million people online to billions.

Now any person with an internet or mobile phone connection can communicate in real time with virtually any other human on the planet. Talk about a revolution.

According to the International Telecommunications Union, there were 5.9 billion mobile phone subscriptions worldwide in 2011, and mobile networks are available to more than 90 percent of the world’s population. It's not just creaky old technology either; some 150 countries offer high-speed 3G service.

No longer relying on companies and government leaders for the truth

When people can communicate in real-time with one another, it has fundamental ramifications for humanity.

A handful of people in Egypt can create a Facebook group that generates support from millions of ordinary citizens and brings down a government.

Anybody can do independent research on the web and choose what to believe about the products and services they consume.

The revolution drives the economy

Mobile phone technology has far reaching influence on the world's economy. People who relied on traditional selling techniques in use for hundreds or even thousands of years suddenly have a global market at their fingertips.

I saw this firsthand when I was visited the village of Cangandi in the Guna district of Panama last year on an expedition organized by my friends at Earth Train.

What’s remarkable about Cangandi is that the several hundred villagers chose to move the entire village over one kilometer away to the top of a hill because that was the one place that had good mobile phone reception. In 2010, they moved the entire village - huts and all - obviously a massive undertaking. 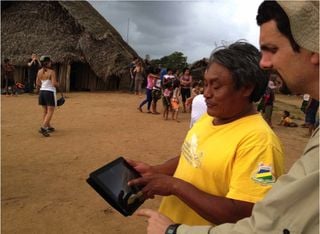 This has transformed the way they do business. Previously, before they had mobile devices, they would load up their canoes with the products they grow such as cassava roots, maize, and plantains and paddle downriver to the Pacific Ocean to the islands there to see who needed to buy. But it was hit or miss. If another seller had been there recently there was no way to make a sale, so they frequently returned after several days wasted.

Now, they have spot market intelligence. Islanders frequently contact them to place orders which the villagers deliver when needed and at a fair price. This is particularly relevant for cassava and other roots because the plants can be kept alive for a long time and harvested as needed or when the offered price and desired quantity make sense.

Without that communication learning of spot market opportunities via mobile devices villagers would frequently be stuck with a canoe full of roots out at sea skipping from island to island only to find that there is little need for roots right then and that they have to sell at a loss.

Even now, nearly 20 years into the revolution, many organizations still aren't communicating in real-time on the web.

Are you one of the revolutionaries? Or do you support the old regime? Are you marketing your product or service like the villagers of Cangandi? Or are you failing to produce content on the web that will do well in the search engines and social networks?

The next few decades will bring a continuation of the revolution. We need to be constantly learning and updating our skills to reach buyers as they're looking for the products and services we sell.

This is an exciting time to be in marketing and communications. In 1,000 years, people will study this period in history books to learn about the tremendous transformations in society brought by the changes that we are living today.

Just like we study the transformation from medieval times leading to the Renaissance due to the knowledge gained from the printing press, the wide availability of mobile technologies and web content to the entire world means humanity is made better.