Amanda Palmer announced yesterday that after a two year fight she is now free from her record deal with Roadrunner Records.

For the past seven years, anything she has written and recorded (either solo or with her band, The Dresden Dolls) has technically been owned and under the ultimate control of the label. 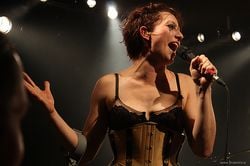 She writes: "as many of you know, i’ve been a very vocal advocate of artists being fearless in asking their audience and supporters for direct financial help.
i come from a background of grassroots theater and street performance, and i think that artists should feel no shame while passing the hat around once they’ve entertained a crowd of people. it’s been a huge and obvious irony that i have been legally unable to ask for money for my music, since it’s been verboten by my contract with roadrunner."

To celebrate, she released a song that fans can download for free.

I've been fascinated with how Amanda has built a following with the Web as a strong component to involve fans in what she does. She has a very popular blog, over 400,000 followers at @amandapalmer on Twitter, MySpace and Facebook pages and more.

You can check out my video interview with Amanda where she told me how she made $11,000 on Twitter in two hours.

The news that she has divorced her label is fascinating. No longer do musicians need a label (although for some it is a great choice).

In my case, I publish lots of content – on my blog, on Huffington Post, in books and in free ebooks. I cannot imagine a world where everything I did having to go through one publisher but that seems to be the world of record labels relationships with artists.

Oh, and read the very kind letter she wrote to her friends at Roadrunner Records. It is at the end of her post.